So we were all shocked last week to learn that Tamar Braxton will be fired from The Real starting on their third season.

A lot of speculations surfaced when Tamar made a post on Instagram saying how she felt betrayed by someone she trusted and was taking a small break from social media.

The somewhat cryptic post left her fans with a lot of questions: What is going on? Who betrayed her? Why is she leaving social media?

Well some of her fans thought the person she may have been speaking of was her friend/producer, Lashawn Daniels, and his wife April. But those rumors were shut down when Lashawn made his own Instagram post saying that he didn’t know who betrayed her, but it wasn’t him and his wife.

The representatives then came out with a statement: “THE REAL and Tamar Braxton have mutually decided that Tamar will not be continuing with the show for its upcoming third season. She will be leaving in order to focus on her solo career. Everyone associated with THE REAL appreciates Tamar’s efforts and the contributions she has made to the show’s success, and we wish her all the best for the future.”

But I thought Tamar was already working on her solo career *thinking face emoji* That will explain her solo album, solo executive position on 3 of her shows, and position on her shows.

Something isn’t adding up.

In the meantime, she unfollowed some of her co-hosts (Loni Love, Jeannie Mai, and Andrienne Bailon) on Instagram, along with The Real’s Instagram. So speculators assumed that the people whom betrayed her were her very own co-hosts!

However, the co-hosts (somewhat) shut those rumors down by posting “loving” Instagram posts expressing how they were blindsided by the news of her departure from the show: 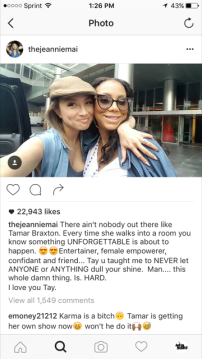 Along with the posts, according to The Jasmin Brand, Adrienne, Tamera, Loni, and Jeannie were all blindsided by the news and even devastated. The ladies expressed that there were no warning signs or even a meeting to announce the news.

Also according to The Jasmin Brand, the ladies would not really be able to do anything about Tamar being fired because they are all under separate contracts and it outlines the different lengths that they are all on the show.

BUT some tea was spilled when Tamar’s former assistant/current best friend took to Twitter to explain what REALLY happened: 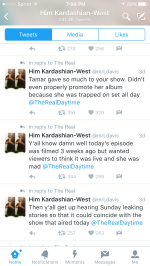 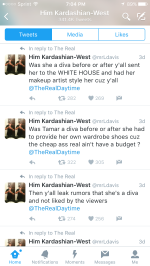 And on top of that, rumors have surfaced that KeKe Palmer would take Tamar’s place on The Real.

But that was shut down when KeKe made this tweet:

So what’s the truth?

Yesterday on Braxton Family Values and on her interview on The Steve Harvey Morning Show (iamsteveharvey.com), Tamar confirmed what REALLY happened on The Real.

She was distraught as she learned the news on the show and explained in her interview that she was getting ready to go somewhere with Vince, her husband, when Vince heard the news that Tamar was fired from The Real. Turns out, that day was a Saturday. So there was some truth to her best friend’s previous Twitter posts. And now we know that The Real’s previous statement was false and they are shady.

There may also be some truth to this comment on Instagram *thinking face emoji* (well, except for Tamera)

HMMM…I guess we’ll know what really happened in due time and on the next episode of The Braxton Family Values.

But finally, in good news, Tamar Braxton will be joining Steve Harvey and his team on a new show and she’ll also be an executive producer 🙂 WON’T HE DO IT! She always wins 🙂